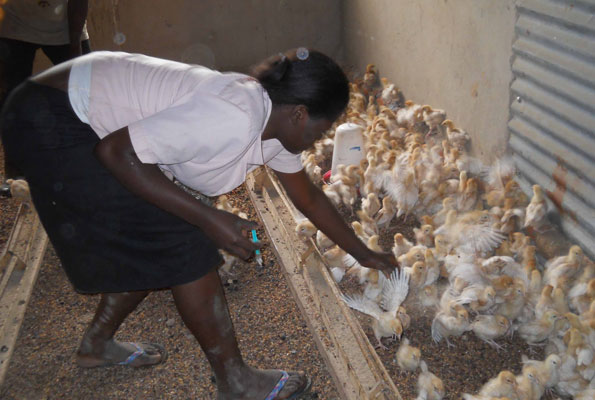 Can farmers do without chemicals?

It is increasingly becoming common to hear people say they do not use artificial fertilisers and pesticides because they want to produce safe and chemical-free crops. Some even argue that chemicals destroy the soil and so they use organic manure since it is natural.
To some, chemicals mean poison. They think it is risky to eat crops on which artificial fertilisers or pesticides have been applied. We also hear some health service providers say their treatment is herbal and chemical-free as if to imply that chemical-free is necessarily healthier.
Can farmers really avoid the use of chemicals? What is a chemical and what is not?
A document, titled Making Sense of Chemical Stories, prepared by Mark Lorch, a chemistry lecturer at University of Hull [in UK] illustrates that it is pretty hard for humans to avoid chemicals: “…right from the air that we breathe to the pills that we swallow, they are all chemicals.”

Safely applied
Everything natural that we eat or drink, including tea or coffee, naturally contains a chemical and what really matters is the amount we consume. “Just because a chemical is present does not mean that it is harmful in the amount present,” Lorch argues.
For instance, he goes on to say, apples naturally contain amycoalin, pears contain forvaldehyde and potatoes contain solann but they are safely eaten by humans.
A lot of the chemicals that we are told to dread are extracted from plants and other organisms. Some natural chemicals are far more poisonous than man-made chemicals. “Man made or natural, tasty or toxic, they are all chemicals,” he states.
When a farmer applies cattle urine on his or her crops as fertiliser, he or she should know how much urea is in the urine that the crop really needs. This may not be easy to estimate.
Yet, urea bought from the farmers’ shop normally comes with guidance on how much should be safely applied on the crops. A large-scale farmer might find it a lot harder to get sufficient urine to fertilise a square mile of Robusta coffee than to buy bags of urea for the same purpose.
A recent edition of Crop Biotech Update Report (released in January 2015) quotes the following statement by Prof. Lord Krebs, Principal, Jesus College, to the Oxform Farming Conference.
“Organic farming does not necessarily equate to environmentally friendly farming. Organic farming is generally less productive per hectare meaning more land is needed to produce a certain amount of food. Converting land to agriculture, especially arable farming, results in the release of large amounts of carbon, so from the point of view of reducing greenhouse gases, organic farming might actually be a worse option than conventional farming.”
He suggested that other forms of agriculture could also be harnessed to mitigate the effects of climate change.
“Some evidence suggests that genetically modified, herbicide-tolerant crops, facilitate minimum tillage agriculture, a further reason for encouraging their acceptance by the food industry,” Lord Krebs added.
“But if we look at the big picture, there’s no doubt that we are going to need all the appliance of science that we can muster, if agriculture is to rise to the challenge of feeding the world in a changing climate with diminishing resources. In short, we are going to have to produce more with less.”
Time and again, animals and poultry must be immunised against disease or treated with medicines and the farmer has to use acaricide (chemicals) to kill ticks and to keep tsetse flies away from the animals.
As Africans, we ought to understand that we face different problems in terms of food production and distribution. Our communities are fighting for freedom from hunger, malnutrition and extreme poverty.

Maximum production
Our population is the fastest growing globally amidst extreme weather conditions due to climate change. We cannot, therefore, afford to adopt farming methods that do not guarantee maximum production. We must increase our use of pesticides and fertilisers, chemical or organic, depending on our ability and circumstances and avoid unnecessary biases. Chemicals are not always poisonous.
As Mark Lorch has said, “The modern world has been built on the innovations of chemists. For example, most of the world’s population is sustained by the innovations by one of them. Fritz Haber invented a means to turn nitrogen in the air into a useful agricultural fertiliser (40 per cent of the nitrogen in you comes from Haber’s reaction). Meanwhile the chemists who artificially prepared or purified antibiotics are responsible for a treatment that saves more lives than any other medical intervention.”
We seem to fear to improve agricultural production by the use of chemicals yet medical solutions that contains chemicals sustain human life. Even medicinal herbs contain chemicals.