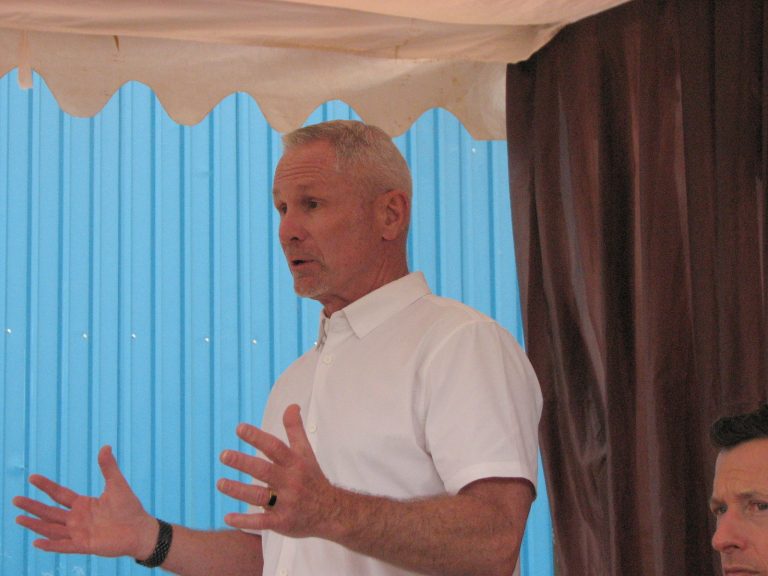 Can One Person Change The World? This One Did!

Margaret Mead famously said, “Never doubt that a small group of thoughtful, committed citizens can change the world; indeed, it’s the only thing that ever has.” Personally, I would argue that a small group is typically organized and led by one person. Here in Uganda, I found the one.

To be fair, I have been in Uganda three days and I could say this about any number of the remarkable social entrepreneurs I’ve met, but Joseph Nkandu embodies that more than most. Philanthropist Jeff Miller, the namesake of the Miller Center for Social Entrepreneurship, noted in his remarks at a brief ceremony at the National Union of Coffee Agribusinesses and Farm Enterprises, always abbreviated NUCAFE, that most people lack the ambition to dream of doing what Joseph has done: remake a national industry.

Joseph participated in the 2016 cohort of the Miller Center’s Global Social Benefit Institute. I covered that for Forbes here.
Over the past 20 years, Joseph has been working to implement his vision of the “farmer ownership model” for growing coffee in Uganda. Perhaps because coffee grows easily in Uganda and millions of people grow a little bit of coffee, the power in the coffee industry has been in the hands of the buyers and their agents.

Joseph observed that farmers in Uganda did not effectively own their coffee. As evidence, he pointed out that when he asked coffee farmers about the price of coffee, they never seemed to know. When he asked the same farmers, who frequently kept a few chickens, about the price of chicken, they always knew. Put another way, small-holder farmers in Uganda have traditionally been price takers.

This provided the basis for organizing farmers into cooperatives to create more balance in the industry so that farmers could negotiate from a position of strength. Today, 198 cooperatives representing 1 million small farmers are members of NUCAFE. Together they produce about $500 million of raw coffee.

More recently, Joseph has been working to create more vertical integration so that the farmers can capture more of the value. Ground, roasted coffee sells for about ten times the price of coffee off the tree. The equipment required to remove the coffee bean from the berry is ubiquitous in Uganda, but beans in that condition aren’t ready to be ground and roasted, substantial cleaning, grading, drying and processing is required to get it ready to be roasted and ground.

NUCAFE has recently constructed and begun operating only the third coffee processing plant in all of Uganda. Joseph believes that it is the only one in the world that is farmer owned. Now, member farmers can pay a tiny fee to have their beans processed, allowing them to increase their revenue 2.5 fold.

NUCAFE also built roasting and grinding capacity at the plant and has begun selling coffee under the brand Omukago, a Lugandan word referring to deep, close friendship akin to family, traditionally expressed with a drop of blood on a coffee bean. Although volumes are relatively modest today, the nearly tenfold difference price allows participating farmers to meaningfully increase their profits even if only a portion of their production.

Joseph grew up on a small coffee farm and then attended university to learn how to optimize coffee farming. He realized after completing school that the system was rigged against the farmers and that the industry would have to be restructured to protect the interests of the farmers.

His father had 16 children–and two wives–stretching the resources of a small coffee grower. His father was also a primary school teacher and understood the need to make sacrifices to ensure that his children had the opportunity to attend school. That investment is now paying dividends for the millions of people who are now benefiting from his son’s work.

Joseph’s next challenge: grow coffee production in Uganda. NUCAFE has targeted a six-fold increase in national coffee production over the next three years. A government-supported effort to plant millions of coffee plants around the country makes this conceivable. If I learned anything from my visit with Joseph, it would be this: never doubt that one person can change the world.