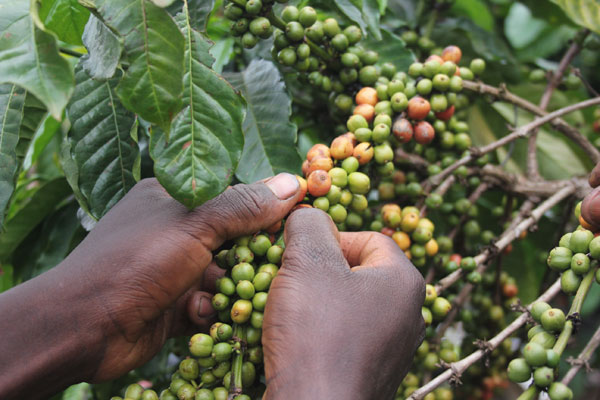 Isaaya Kizza is a 23-year-old young man with a passion for coffee farming. He describes his love for farming as a “bitter-sweet love story”.
At the tender age of 19, Kizza began working on the farms neighbouring Nkokonjeru village in Buikwe District, during school holidays to supplement his pocket money at school.
Five years later, and a few lucky breaks along the way, he now exports about one tonne of washed Robusta coffee to Italy on top of managing Mabira Coffee Youth Investment Club, which is under Mabira Coffee Farmers Association.

It is an umbrella association for farmers from Ssi, Nkokonjeru, Ngogwe, Kawolo and Nakisunga counties.
The association works with National Union of Coffee Agribusiness and Farm Enterprises (NUCAFE) and partners to empower youth into the coffee value chain to start up their own businesses especially coffee nurseries.
“As a youth into coffee farming, I want to develop and prosper so that my fellow youths can also engage in coffee production in order to improve their standard of living,” says Kizza.

Conflicting passions
When he completed his Diploma in agriculture at Ssese Agrovet Farm Institute Kalangala in 2013 and later a certificate from Makerere University Agricultural Research institute, Kabanyolo, Kizza was conflicted between following his passion for farming and veterinary.
“I first tried veterinary because I had not specialised and it seemed like the right thing to do. However, I decided to do coffee farming after things failed to work,” he says.
David Muwonge, the Executive Director of NUCAFE then employed him at Mabira Coffee Farmers Association offices as the manager in 2014.

Lucky break
His dream came to reality. He got a Shs15m loan from Centenary Bank to kick start his passion.
There was no going back. He got a hint on wet processing of coffee and had to stay in Mbale District for two weeks to witness firsthand how it is done. Unlike Arabica, Robusta coffee beans are generally small and pose some challenges. He did not give up.
Later that year, a Skilling Youth in Uganda programme came up and he wrote a proposal that took six months to be approved.

In February 2018, he was given a green light and he was extended a Shs17m soft loan which he used to buy 16 pulpers.
“The revival of Mabira Coffee Farmers Association started in 2014 when I came as manager but now I plan to register Mabira Coffee Youth Investment Club independently to be able to inspire more youths into coffee farming,” Kizza says.
She now has a one-acre coffee farm but employs four people from his community at the processing plant.

Wet processing
As word spread about the dynamic young farmer, big brands started knocking on his door to offer assistance. Italian coffee giants Caffè River came to his aid to improve their coffee quality by offering a wet processing equipment and factory.
With this factory and equipment in place, farmers are able to wet-process their coffee in order to produce specialty coffee fit for European markets. This has kept the business nurtured.
Kizza exports washed coffee to Italy at a teasing price of Shs10,000 per kilogramme to Italy. After sales, he earns about Shs100m in profits.

Challenges
Small hitches concerning little supply of coffee and theft are too small to stop him. His only worry is that washed coffee needs a steady supply of water and could be troublesome in dry areas.

Bright future
He wants to form part of the next group of young entrepreneurs who will transform coffee production in the country through the countrywide programme Omukwano, “friendship” in Luganda, the name given to the partnership between Caffè River and NUCAFE and the coffee produced under such an agreement.
All farmers are grouped in Coffee Farmers’ Associations and they include; Bulansuku, Bunjakko Island, Buwama, Buwunga, Dwaniro, Kabonera, Kagamba, Kagango, Kibinge, Kkingo, Kisekka, Kyanamukaaka, Kyangyenyi, Lwamagwa, Lwanda, Lwengo, Mountain View Farm, Nsangi, Nyabubare and Zibul’atudde.
“I am very confident about the future and I hope one day I will be able to open a training centre for the youth in my community and teach them about coffee farming,” he says.

• Before packaging, coffee is dried and a coffee moisture metre is used to measure coffee bean moisture. Coffee must be dried from approximately 60 per cent moisture content to 11-12 per cent moisture content.
• Coffee is typically dried on large patios made of asphalt or cement and then transferred to mechanical dryers.
• The coffee on the drying patios is shifted every 30-40 minutes and is shaped into long rows of no more than five centimetres in height.
• Next to each row is open ground, which is warmed and dried by the sun.
• The coffee is then shifted onto the dry portion of the patio, and the section where it was previously is now allowed to dry in the sun.
• This helps accelerate the coffee drying process and prevents fermentation and moldy beans from developing.
• This method is widely used in Brazil, but less widely used in other coffee processing where the coffee is more often piled perpendicularly to the old piles.

• Drying coffee solely by patio takes 6-7 days for washed coffees, 8-9 days for pulped naturals (semi-washed), and 12-14 days for natural (dry-processed) coffees.
• This is why coffee beans are typically dried on a patio until they reach a moisture content of 15 per cent and are then transferred to mechanical dryers.
• Once the coffee reaches a 25 per cent moisture content or less, it can be piled at night and covered with cotton cloths to allow the coffee to breath.
• If it rains, these piles can also be covered with plastic.
• Coffee should not be covered with burlap sacks since this will impart a distinct burlap flavor and aroma to the coffee.