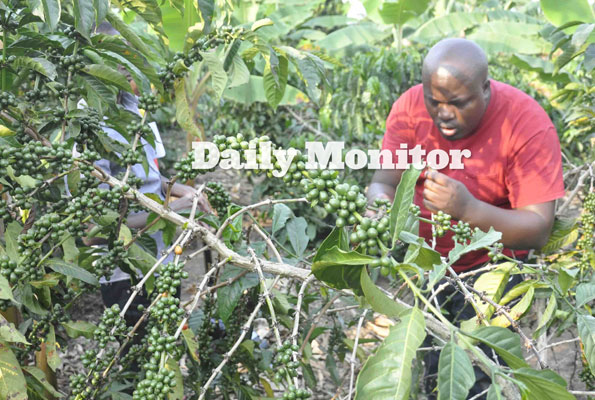 Notion that for one to milk a cow, it has to be fed resonates with Scripture teaching that to reap, one must sow. This is the perspective of many of the youth in Rukungiri District.
Emmanuel Kweyunga, the chief executive officer, Keirere Green Africa Agency, notes that while growing up in Keirere village, their livelihood depended largely on coffee. However, by the time he reached the end of his formal education, diseases threatened to wipe out the crop from the area.
It is then that Kweyunga decided that he would not let the cash crop die.
Instead of opting for formal employment, he decided to set up a chain of services that coffee farmers require to grow the crop.
He realised that production of seedlings alone, had ready market from both government, farmers and other clients such as non-governmental organisations.

Necessary inputs
And again, after starting production, hitherto dormant jobs in extension services opened up. These included training farmers to plant the seedlings, pruning and how to detect diseases especially the coffee twig borer, which had invaded the area.
When Kweyunga introduced spraying services to tackle this pest, he observed farmers could not afford spraying the gardens individually. The chemical to spray an acre with 450 coffee trees requires Shs300,000 to purchase.
It is noteworthy that it was believed that an acre needed 1,000 trees. But the recommended number is 450, which are easy to manage and the farmers in the area have adopted this.

This was an opportunity to start a Sacco, where all the farmers he serviced joined to benefit from subsidised services.
So, from the Sacco, they stocked necessary inputs. This included introduction of irrigation services, all done by youth he has trained and employed.
Spraying a coffee tree costs Shs600 and he deploys five boys to an acre. Each are hired at a daily wage of Shs7,000. These are the same teams which carry out irrigation services during the dry season.

From his calculations, the cost of spraying constitutes 30 per cent of the total investment into the crop. Therefore, the farmers have to invest in pest control.
Farmers should appreciate the impact of pests on the crop and how they spread from garden to garden.
“When neighbor X sprays his garden and neighbor Y does not spray his, the pests will still come back and attack the plants,” he says.

Reduced unemployment
After starting their operations, Usaid/Feed the Future Commodity Production and Marketing Activity (CPMA) picked interest in their model of operations.
Under this, there was training on how to handle chemicals and modern spraying pumps were provided on a buy-one-get-one-free arrangement. The group bought 10 pumps.
Today, youth unemployment that is a problem in the area has reduced. Just like it would be in formal employment, they report for work at 7:30am and leave at 6:00pm. A typical work-day starts with a morning meeting to brief them on the day’s duties and schedules. From his office, Kweyunga ensure that this goes according to plan.

He employs a wide range of professionals including accountants, agriculturalists, agronomists, veterinarians, as well as casual workers.
Besides the crop section headed by an agronomist, there is also the animal section headed by a veterinary officer. There are pigs, which are for producing manure because coffee is a seasonal crop. They also encourage farmers to have other income-generating projects while the coffee matures.
All these activities translate into a seasonal net income of Shs300m after expenses are deducted.
Kweyunga, who is a Mandela Washington Fellow, plans to set up a demonstration farm for best agricultural practices. Some of these are application of fertilisers and irrigation.
On whether farmers do not have misgivings about fertilisers, he says there are practical demonstrations on a specific plot of land. And the farmers use their own judgement on whether to adopt or not.

Better productivity
He believes that the various misconceptions about fertiliser and chemical use among farmers has largely been caused by insufficient information.
When a chemical is manufactured targeting a specific purpose, it is unlikely such a chemical can be released into the market without testing its side-effects. The misrepresentation is on traditional view that does not accept the importance of pesticides in agriculture.
As a result of the trust earned, several farmers turned over the management of their plantations. The agency manages them on the farmers’ behalf. What started out small, has turned into a social enterprise.
The services offered include care for seedlings, pruning and planting new trees.
The biggest impact they have registered are the testimonies of farmers. These have become inspirational to fellow farmers, which has also led to better productivity.