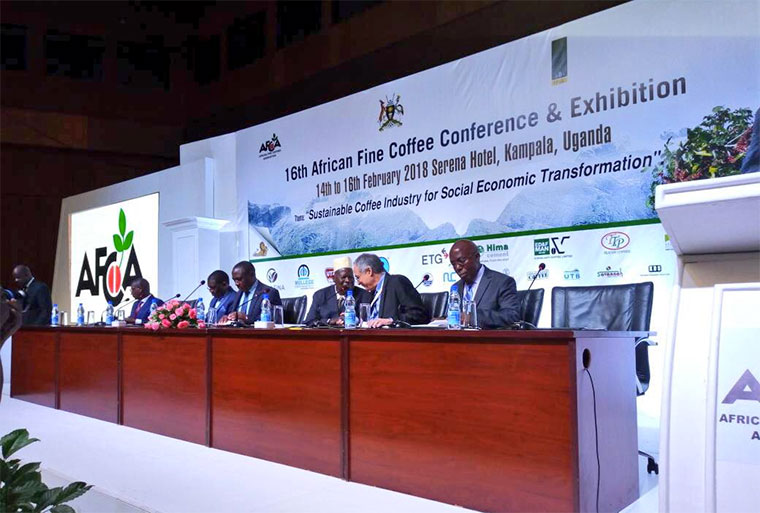 However, as pointed out at the 16th African Fine Coffee Conference in Kampala recently, a few bumps stand in the way of the multi-billion dollar dream. On paper, the government has an ambitious target of reaching 20 million (60kg each) bags per annum by 2020.

But the more realistic figure rests in the Uganda National Coffee Strategy Plan for 2015-2020, which sees Uganda producing 5.8m bags by 2020. This would rake in at least $1.1 billion, making coffee the second highest foreign exchange earner, after tourism, which brings in $1.5 billion.

The government hopes its Operation Wealth Creation programme, through which up to three million seedlings have been distributed, will realise the desired coffee revolution.

Vincent Ssempijja, the minister of agriculture, told the conference: By Ugandan standards, someone with two acres can live a good life if they use better agronomical practices”.

But the meeting, which brought together farmers, transporters, roasters and consultants from all over the world, noted that a lot needs to be done.

It was observed that while Uganda is raising coffee production, her Robusta and Arabica fetch less on the world market because of poor quality.

Konrad Brits, the director of Falcon Coffees in UK, said this is because “the handling is very poor, resulting into the negative differentials we see today”.

As at January 31, the average [Arabica] coffee price ranged from 115 to 143.77 US cents per pound (0.45kg) on the global market, according to the International Coffee Organisation (ICO). Robusta traded at 88 US cents.

An estimated 1.8 million Ugandan households are involved in coffee production, with 80% growing Robusta, according to Uganda Coffee Development Authority (UCDA).

Uganda is expected to ultimately raise production to 12 million bags by 2040 with a potential return of $2.5 billion every year.

“This will be achieved by enhancing access to extension services, agricultural inputs, marketing services, and other appropriate technologies in coffee farming by smallholder farmers, processers and middlemen,” the 2015-16 coffee strategy document states.

While the country’s production has for decades relied on smallholder farming, there is a growing trend of Ugandan elites joining the industry with five to 20-acre gardens.

Coffee is of particular significance to the economy because of its poverty alleviation potential. A study by Makerere University’s Economic Policy Research Centre titled The potential of coffee to uplift people out of poverty in northern Uganda, 2014, found that coffee-producing households were better off than non-coffee producing ones.

To underline the significance of a coffee revolution, the projected earnings could outstrip what Uganda expects to earn from oil – about $3bn – annually.

In the 1980s, Vietnam which had just emerged from a destructive war with the USA, was producing approximately 1 million bags of coffee – about the same as Uganda. By 2017, Vietnam produced 26 million bags.

“The remarkable production was a result of consistency with the [Vietnam] government support and encouragement and transition from large-scale plantations to large state-owned farms and finally to small farmers with an average farm size of 1.2 hectares,” says the Ugandan coffee strategy.

Uganda shares similarities with the Asian country – relatively cheap labour and favourable climate. However, to aim as high as Vietnam, Ugandan farmers will have to explore irrigation, use of fertilisers and chemical spraying to control pests and disease.

Uganda’s marketing of this world’s second most traded commodity after oil, remains a sticking point too.

“We are also improving the quality of seeds and seedlings through strengthened research and multiplication of improved varieties,” Iyamulemye said.

He said the authority is registering all coffee farmers, having started in Mukono and Kayunga, with Kalungu district coming next.