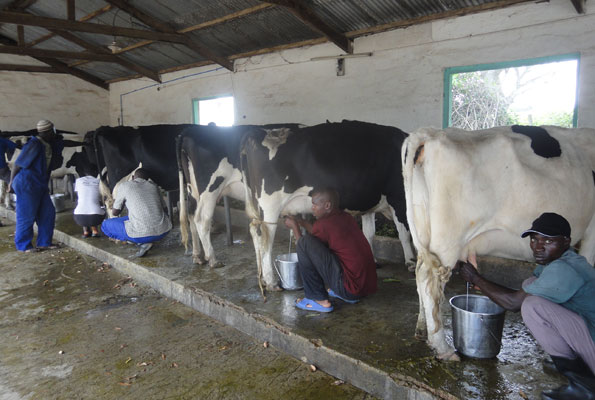 In order for farmers to produce good quality milk and minimise losses, they have to take into account that quality starts with hygiene of the cows, equipment, and farmers as well as at post-milking handling stage, among others. But many dairy farmers start to lose quality of milk right from the cow’s udder.
Poor post-milking handling does not only affect the farmers’ revenue but also the revenue of the processors who buy the milk.

Training
To prevent such losses, various stakeholders in the dairy sector, who include Ruhiira Millennium Villages Project (RMVP), Korea International Cooperation Agency (Koica) and Uganda Crane Creameries Cooperative Union (UCCCU) are involved in educating dairy farmers on animal health, feeding, milking plus handling of milk and its products.
At a recent training held at Mbarara Zonal Agricultural Research Institute (Mbarara Zardi), the district veterinary officer, Dr William Mwebembezi, observed that milk quality is wanting because many farmers do not have knowledge about milk handling.

Right information
Speaking to the trainees, who were dairy farmers from Kabuyanda and Nyakitunda sub-counties, he noted that it is the duty of veterinary staff to aid farmers with information.
Some of the mistakes dairy farmers make are avoidable provided they have the right information.
The factors to take into consideration include dirty udders and teats, milk storage containers, milking buckets, personal hygiene of the farmer who is milking, dirty hands and animals putting dirt in the milk while milking and timely delivery to bulking centres. Others include poor milking parlours, using poor milk storage containers and contaminated animal feeds.

What farmers should do
“To avoid this, each farmer should clean the udder and teats with warm water, dry the teats and the damp base of the udder with a clean towel. Use a fresh towel per animal to avoid the spread of masitis , tie the cow tail and wash hands with warm water”, Mwebembezi outlined some of the steps that they should take while milking their cows.
Milking buckets must be made of good-grade materials preferably aluminium and animal feeds should be kept in dry conditions to avoid contamination, which give rise to the presence of aflatoxins.
Also, he said farmers can use Jik as a disinfectant to clean the milking equipment after washing them in the ratio of 15 ml of Jik in three liters of water.
To avoid contaminating milk with mastitis, each farmer should have a strip cup to test which animal is sick by checking each teat before milking.

Heed advice
Many dairy farmers lose quality soon after milking. These losses affect revenue since one cannot sell the spoilt milk.
Besides, milk should be taken to a bulking centre immediately to minimise the possibility of bacteria in the milk multiplying. This is so that it can be chilled to around four degrees Celsius.
Contaminated milk loses colour, flavour and gets an odour to the point that it becomes unsuitable for human consumption. Eventually, it is rejected by the milk cooling chain.
Farmers are also urged to heed advice by veterinary staff not to milk sick animals and those on medications, especially those being treated with antibiotics. Animals should not be milked while on treatment with antibiotics.
When they are milked before the end of the withdrawal period, milk is contaminated and becomes unfit for consumption. The milk should be disposed of.
Dr Louis Aziku, an animal health expert, RMVP, pointed out that the presence of antibiotics, level of acidity (natural acidity of milk ranges from 0.16 to 0.18 per cent) and the practice of adding water to increase volume and aflatoxins from contaminated feeds; all lead to poor quality and subsequent rejection by milk processors.

Quality test
To ensure that farmers improve milk quality, Uganda Crane Creameries Cooperative Union (UCCCU), in conjuction with AbiTrust, has provided farmers with milk coolers, mini laboratories for quality tests, vehicles to transport the milk from bulking centres and staff to sensitise the farmers on their roles and responsibilites in the milk industry.
Saint Pancrasio Tumusiime, dairy extension officer, UCCCU, says in southwestern region where they operate, farmers have embraced trainings and results are promising. “We have taught farmers to cooperate and do bulk sales to the bulking centres before it is picked by processors.”
“Here, the basic tests are done using the alcohol test and lactometers in the laboratory at each centre to guarantee quality and avoid spoilage,” he adds.
The alcohol test analyses the quality of milk protein stability while the lactometer is used to check if milk has been adulterated basing on the milk density. This should ranges from 1.026g to 1.032g per millilitre. Adding water to milk lowers its density, while solids increases the density.