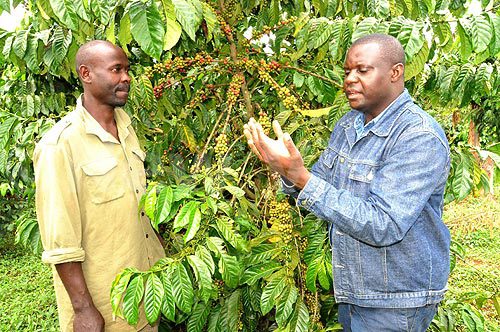 When Joseph Nkandu set off to work with coffee farmers to boost productivity in 1999, hardly did he anticipate that by now, the works of his hands would have positively transformed the social and economic statures of more than half a million farmers and earning him international recognition.

Nkandu’s life Fellowship at the Washington-based body (Ashoka) comes as a prestigious award for successfully leading a team-work at The National Union of Coffee Agribusinesses and Farm Enterprises (NUCAFE), a body that has for more than a decade worked with coffee farmers, guiding them through the dynamics of the modern farming, marketing and entire coffee value chain.

According to a document from Ashoka, Nkandu’s systematic selection was premised on his efforts to spearhead and realise untold benefits of the Farmer Ownership Model (FOM), an architecture directed at changing the role of the middlemen in the coffee value chain and increasing the monetary value that farmers retain, thus salvaging smallholder farmers from the plight of losses.

His new idea of the F.O.M that changes the system that breeds farmers as beggars, the entrepreneurial quality that builds an eco-system that connects social and business sectors, ethical fiber, creativity and overall social impact that brings to light dignity and plight of farmers were the basis for his international recognition.

Although coffee is the most lucrative agricultural enterprise in Uganda, the value chain leaves coffee farmers with less than 2% of the retail value, leaving most of them trapped in a vicious cycle of poverty, yet they play the most important roles along the production chain.

“With the FOM, much has been achieved in terms farmer to farmer relationships, improved production and productivity after farmers have been helped to market their coffee as groups after taking the produce through a number of stages up to the level of marketing graded coffee that fetches more money that previously went to middlemen,” Nkandu said while speaking to Sunday Vision.

FOM redefines the role of farmer organizations and transforms them from merely buyers to partners who work with farmers to increase the shared value that they receive from coffee sales.

Coffee processors are introduced to a new win – win relationship with farmers where, instead of buying raw material coffee from farmers at low prices and reselling this to the next player downstream, they are now offering their expertise and facilities to farmers for a fee. In doing so, they enjoy higher operational capacity and increased revenue.

Simultaneously, this value addition allows farmers to retain ownership of a more valuable form of coffee that earns them a higher return in the market.

By the last quarter of calendar year 2013, NUCAFE had mobilised a membership of 160 coffee farmer associations and cooperatives comprising over 600,000 farmers. Farmers have been holding onto their produce to the extent of even exporting directly high end markets in Europe, China, America and Canada.

Ponsiano Kamanzi, a prominent coffee farmer in Bunjakko Island recounts that before NUCAFE worked with him and other farmers in his locality, some people used to sell off their coffee as early as at the flowering stage, until they got saved by the farmers’ body that linked them to markets.

During a recent media tour of the Bunjakko area, it was evident that the benefits from coffee farming were the reason for transition of families from ramshackled homesteads into the multi-million modern houses.

“We are also installing a coffee processing plant, by the end of next year, some farmers will be marketing coffee as a finished product,” says Nkandu.

The same body under the chairmanship of former finance minister and farmer Gerald Ssendaula was instrumental in advocating for the recently launched National Coffee Policy, the first of its kind in the country to be advocated for by the citizens.

Nkandu says that his works have been possible largely because of compassionate leadership, the innovation of FOM that empowers farmers as collective entrepreneurs, team-based culture of staff, institutional transformation and relationship with partners that support farmer initiatives such as the DANIDA programs; Agricultural Sector Support Programme, ABi Trust, TRIAS, Agriterra, ITC and other stakeholders in coffee development.

He is further confident that most of the smallholder farmers he works with will be the first to realise Uganda’s Vision 2040 targets of each household earning sh20m per year. NUCAFE targets a membership of one million farmers in the next ten coming years.

In a separate milestone, NUCAFE emerged winner of the Income Diversity category of Africa Farmer Organisation of the Year Award (FOYA) 2013 organized by AGRA (Alliance for a Green Revolution in Africa) and worn also the East Africa inclusive Agribusiness Model of year 2013 under the East African Agribusiness Summit organised by Focus on East Africa.