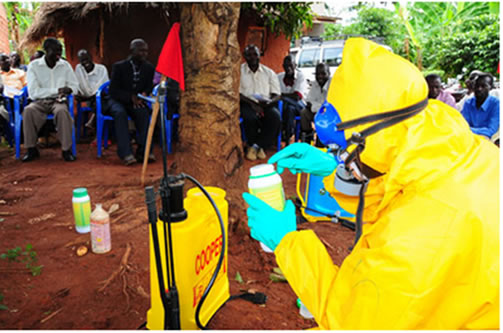 Coffee farming especially in central region has been affected by coffee wilt for the past few years. Many coffee farmers had abandoned the growing of coffee and changed to other crops which were not affected by the wilt disease.

However farmers in Mukono, Luwero and Nakaseke have now turned to sprinkling methods in order to fight the coffee wilt disease.
Lawrence Zikusooka a farmer in Zirobwe said that for three years most of the coffee plants in his farm were affected by the wilt.

“I made lots of losses when one acre of my coffee plantation was attacked by the wilt disease. I even abandoned it and started growing other crops in order to sustain my family,” he said.

Zikusooka said that with other coffee farmers they formed group in the area in order to help them find solutions of halting the wilt disease from spreading in the region.

“We made a group and decided to rejuvenate the growing of coffee  in the region. I decided to bring some extension officers who helped us to get good coffee varieties, “he said.

They also got suppliers who  helped them collect chemicals and fertilizers from the major suppliers in town. Each supplier would feed an estimated group of farmers in the area for a given period.

He said that he worked with USAID-LEAD project to ensure that coffee farmers in the area are sensitized against harvesting premature coffee saying that this affects the quality of coffee exported at the world market.

“I have increased the number of farmers and agents I deal with especially on farm pre-season preparation such as spraying and use of fertilizers, harvest and postharvest methods,” he  said.

Zikusooka advised farmers to make groups because they work better and even easily access markets for their products.
“Under the LEAD project we got a set of uniforms and sprayers that enabled us to start our initial project of spraying the affected coffee areas,” Mukasa Lawrence a coffee farmer in the area said.

Over 200 coffee farmers have benefitted from sprinkling services in the area.  Most coffee farmers receive more money from there produce after spraying their coffee garden.

USAID-LEAD project helps farmers to strengthens there business relationships with input suppliers of the fertilizers.
Rispa Machuki USAID-LEAD officer said that they have been providing technical support to self-selecting Robusta coffee processors in various districts.

“We integrate farmers,  processors and related Small and Medium Enterprises (SME) into commodity value chains in order to get improved supply chain practices, “he said.

In order to improve on coffee quality and ensure sustainability of coffee value chain results and positive impact on farmer livelihood, USAID LEAD has implemented a series of intervention.

They include increase in farmer and agent production and quality, and processors attracting support from policy makers and government.

The current market share of coffee especially processed coffee a kilogramme stands at Shs 3800 compared to about Shs 2,500 for the poor quality coffee.

“We face lots of challenges which include poor access to genuine seeds, planting materials and agro chemicals.  Farmers have to travel to town at considerable expense to purchase agricultural inputs, “ Mukasa  said.

“Orders are also organized through pre-planning meetings to ensure their timely delivery and farmers gain knowledge on new and improved technologies, their proper application and save on input retail prices and transportation costs,” he said.
From New Vision