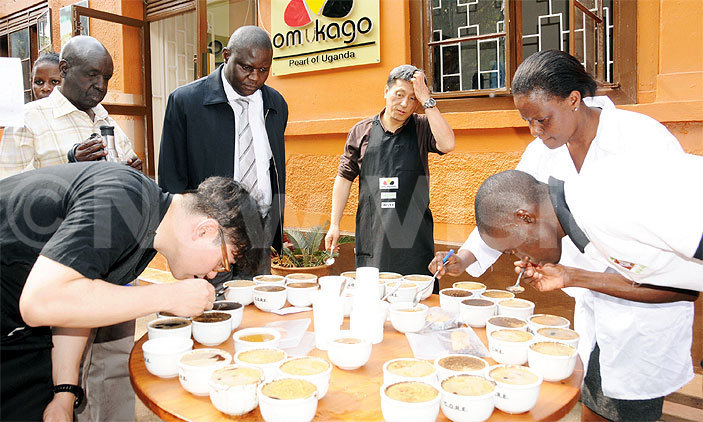 For more than 15 years, smallholder farmers in Uganda have been taking different strides, pursuing more financial benefits from coffee agribusinesses.

South Korea-based Caffebene, a global coffee house, has agreed to buy graded coffee from members of the National Union of Coffee Agribusinesses and Farm Enterprises (NUCAFE), an umbrella organisation that promotes value addition and teamwork among coffee farmers.

A team comprising Caffebene senior managers and agribusiness consultants was in Uganda recently to undertake background checks within the farming communities in different regions, coffee processing facilities and perform coffee tasting to ascertain the quality parameters and determine price offers. Caffebene is present in over 1,600 locations worldwide.

According to Choo Seung Min, a coffee Barista and team business manager at Caffebene, Uganda’s coffee scores highly on quality, a basis that will give farmers leverage in negotiating good prices.

“We have moved across the country and ascertained the quality controls that farmers undertake while growing coffee. We are further convinced by the processing and grading of the coffee, as well as the taste,” Choo said in an interview after a tasting exercise held at Café Omukago, NUCAFE’s coffee shop in Kampala.

Choo described his company’s move to start buying coffee from Uganda as a key milestone, especially because the firm has played a role in uplifting and encouraging Uganda’s smallholder farmers.

Uganda is Africa’s lead coffee exporter, while Ethiopia is the lead producer.

Tae Kyung Kim, the chief executive officer of Beansguru, a coffee value chain consulting firm based in South Korea, said Uganda’s coffee is more competitive than that of Rwanda, Kenya and Ethiopia.

He, however, cautioned Uganda to continue adhering to the quality needs at every point in the value chain.

“I recommend Uganda’s coffee to the global end user dealers. The different actors along the value chain should consistently be value-sensitive because the quality in the cup is nurtured from when the coffee is still at seedling level, through harvest and post-harvest handling, processing up to that level of consumption,” Kim said.

At the end of last year, NUCAFE exported 20 metric tonnes of speciality terrestrial (regionally selected) coffees to South Korea. This was the first official consignment from Uganda to South Korea.

Over 80 metric tonnes will be exported between February and May this year, according to the body’s executive director, Joseph Nkandu.

Nkandu noted that the marketing breakthroughs that farmers are making are fruits of operating within the framework of the farmer ownership model.

Under this model, farmers take different roles along the value chain, enabling them to achieve shared value with responsible buyers as opposed to making them mere spectators or, at best, custodians of middlemen. For example, the current farm gate price of 1kg of dry coffee cherries goes for sh1,000 in Rukungiri.

A farmer needs to process 2kg of dry cherries to have 1kg of graded exportable coffee, currently selling at sh5,000. This means farmers who insist on owning their coffee and exporting it, earn sh3,000 more per 2kg.

“Now that our farmers have reached the stage of satisfying the quality requirements of the global leading dealers, the challenge remains in improving productivity, as well as tapping into research that seeks to grow disease resistant and high yielding coffee varieties. This is the way to hit the country’s target of annually exporting 10 million bags in the next 10 years,” Nkandu said.

NUCAFE comprises over 180 coffee farmer associations and co-operatives mobilised from more than 200,000 households that share knowledge and skills on all aspects of having an equitable share of the treasures of coffee.

“We have examples of farmers who used to sell their coffee even before harvesting. However, as a group, they are selling graded coffee. Joining the group was enough to boost their bargaining power, owing to the large economies of scale,” he said.

Nkandu was optimistic that the quality control issues will be dealt with as the country moves to have a national coffee law that will be benchmarked on the recent farmer spearheaded National Coffee Policy, whose popularisation is supported by USAID.

Quantity Rita Kyamuhangire, a qualified international coffee taster and project co-ordinator for the Centre of Robusta Excellence at Uganda Coffee Development Authority, noted that Uganda’s coffee is highly competitive for its richness in aroma.

However, her only pessimism lies in the country’s capacity in raising the required quantities as the world continues to show interest in buying her coffees. –