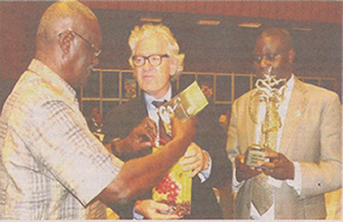 Nucafe Board chairman Gerald Ssendaula hands over their coffee product to the Danish Ambassador to Uganda, Mr.Dan E. Frederiksen as executive director Joseph Nkandu looks on. This was after Nucafe was awarded for supporting commercial agriculture.

Kampala government has been tasked to improve the legal and regulatory frame work to provide a safe environment for farming, agribusiness and investment in the country.
The Danish Ambassador to Uganda, Mr. Dan E Frederiken said despite agriculture being a foreseeable key to development of East African economies, “Crooks and charlants thrive where corruption is rife.”
“Today, when a citizen in Uganda seeks state services, there is a 27 per cent probability that a bribe will be solicited and 90 per cent of the time, they will not do any think about reporting that”, said Mr. Frederiksen.
Speaking at an award dinner at the East African Agribusiness investment Summit in Kampala recently, the envoy observed that despite the positive pull factors, economies continue to experience difficulties in fully exploiting the potential of the agricultural sector.
A number of East African agricultural organizations were a warded in recognition of their roles in supporting commercial agriculture. They include; Rwenzori Commodities,(National Union of Coffee Agribusiness and Farm Enterprises) (Nucafe), Agro-Genetics Technologies, Agri-Vie Fund, Equator Seeds, Golden Bee Ltd,Root Capital, African Seeds Investment Fund and Total Land Care Viphya Project.
In Uganda Agriculture still employs more than 70 per cent of the total labour force and accounts for more than 50 per cent of exports earnings as well as providing a large proportion of the raw materials for industries.

According to Mr.Frederiksen, infrastructure bottlenecks continue to constrain farm profitability and deter investments in agriculture yet farmers pay too much for inputs and receive too little for their outputs.