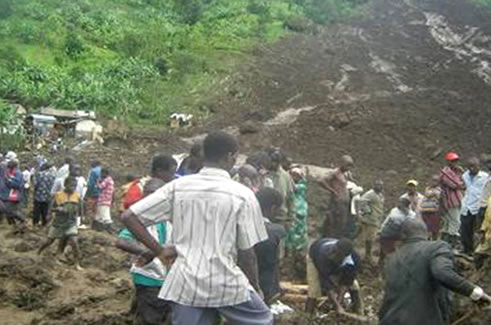 Landslides wipe out 2,000 acres of coffee in Bududa

It is said that “It never rains but it pours”. This saying is so true as far as Bududa is concerned.

First, it was the landslides – mini and major – then the falling prices of coffee and now entire coffee plantations are wiped away.

This disaster that has struck Bududa and other districts surrounding Mt. Elgon is expected to impact on the Arabica coffee output and the disposable income of farmers this season.

Beatrice Kiboona, a coffee farmer in Bushiyi explained that she lost four acres of coffee that were stripped bare during a recent hailstorm in the area.

“I had 2,500 coffee trees and they were all destroyed in the disaster. Each season, I used to get between sh2.5m to sh3m from sale of parchment, depending on the market prices. Coffee has been my sole source of income,” Kiboona said.

Mathias Nabutele, the proprietor of A Coffee Cup, a local coffee purchasing firm, explained that the latest disasters destroyed all the mature coffee cherries that were ripening. Nabutele explained that Bududa supplies about 25% of the total parchment in the region. He said the repeated disasters had dealt a blow to the output.

“Considering that these disasters struck at the start of the harvest season, we have lost over 5,000 metric tonnes of high value coffee parchment in Bushiyi alone, and the figure could double with the other sub-counties combined. This means some farmers are going to have zero output on the market,” Nabutele stressed.

The Arabica coffee harvest season which started this month is expected to peak in October.

An assessment report by the Uganda Red Cross Society Indicates that the recent hailstorm destroyed 2,306 acres of various crops in Bushiyi sub-county alone.

Moses Siisa, the LC3 chairperson for Bushiyi sub-county explained that unlike the previous disaster that destroyed only cherries, the recent hailstorm destroyed the coffee trees, too.

“The hailstorm led to the peeling off of the bark of the coffee trees, all of them are going to dry up and necessitate re-planting. Coffee trees start yielding after four years,” Siisa said.
From NEW VISION