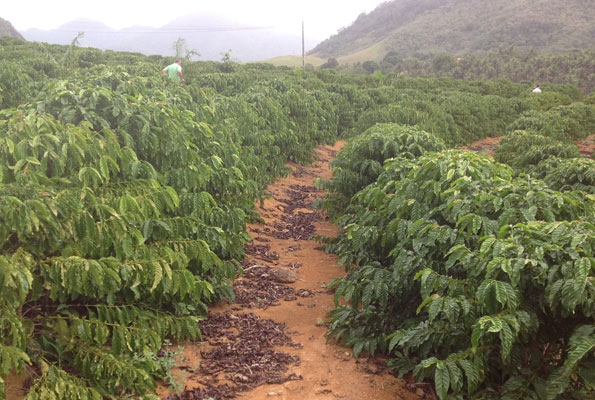 For a very long time Uganda’s annual coffee production has stagnated at about three million 60kg-kilogram-bags. About 42 per cent of households are engaged in coffee production and coffee farming has been linked with the country’s poverty reduction efforts.

The government periodically donates seedlings to households willing to take up coffee farming as part of the campaign to get more people to grow the crop.

Coffee is the country’s third most important foreign exchange earner after tourism and remittances from Ugandans working abroad.

Innovative options
The national objective according to the Uganda Coffee Development Authority (UCDA) is to increase production to six million bags in 2019/2020 and 15 million by 2039/2040.
“Most of our producers are small-scale farmers with hardly any capacity to purchase more land to grow more coffee,” says Joseph Nkandu, the executive director, National Union of Coffee Agribusinesses and Farm Enterprises (Nucafe).

“To increase production, they will not only need to plant higher yielding varieties and apply better agronomic practices. They will also try innovative options like planting more trees on the same acreage of land.”

The common practice among Robusta coffee growers is to plant about 450 trees in an acre at the spacing of three metres by three metres between trees and between rows. Yet in Brazil, which is the world’s leading coffee producer, at 55 million 60-kg bags annually, about 1,300 Robusta coffee trees are planted in an acre.

Proving it is possible

Like Uganda, they grow both Arabica and Robusta coffee but more coffee is produced from an acre in Brazil than in Uganda.
The Ugandan farmer applies perhaps the same amount of labour as the Brazilian farmer on the same area of land but earns much less. “I have visited Brazil and seen what they do and I believe we can copy their example,” notes Nkandu, a Makerere University trained agriculturalist.

He is also a coffee farmer, who has embarked on an on-farm demonstration project to prove that it is possible in Uganda to produce coffee the Brazilian way.

He has obtained land at Buzami Village, Bunjakko Island in Buwama Sub-county, Mpigi District. Here, he has set out to grow coffee like it is grown in Brazil. There is also an irrigation system to rule out drought-related drawbacks.

He has planted Coffee Wilt Disease (CWD) resistant Robusta and applied the good agronomical practices, and he expects harvests to begin in just a year. At four months, most of the young trees were over two feet high.

The coffee trees in this new farm are planted in rows at spacing of one metre and the rows are three meters apart.
Nkandu explains: “They are not too close to be highly productive. Remember that the coffee plant was obtained by mankind from the forest where it grew wildly with the trees quite close to one another. So their closeness in a line will not reduce fruition levels provided management is good.

Use of the spaces
He was however quick to add while in Uganda coffee may not be farmed with the use of machines the space will make it easier for the farmer to inspect the crop, to prune, and to spray any pesticides or herbicides.

“With good fertiliser application and proper management of the canopy, I expect very high yields. This is exactly what is done in Brazil and the three-metre spacing makes it possible for machines like the tractor or the combine harvester to pass in between.”

Between the coffee lines, Nkandu has placed heaps of dry maize stalks that act as mulch and source of potassium, keeping the ground moist and at the same time reducing the risk of soil erosion.

“Eventually the maize stalks or any other such dry plant material will decompose and turn into manure to further enhance the coffee growth vigour,” he told Seeds of Gold.
To achieve rapid growth, Nkandu notes it is necessary to prepare the ground well.

Nourishing the crop
Before the actual planting of the coffee clone, a hole measuring about two feet deep and two feet wide is dug and covered up for a month with top soil that is mixed with poultry litter. It is into that soil that the coffee clone is planted.
At the time of planting, apply about 30 grams of Single Super Phosphate around the foot of the clone.

After about four months, the farmer is advised to apply 30 grams of NPK 17:17:17 around the clone to help the crop develop more leaves and to prepare it for flowering.

With regard to irrigation, water is pumped from the lake into a tank at the higher end of the coffee farm from where it flows in small tubes lined along the bases of the planted coffee seedlings dripping slowly into the ground in what is known as drip irrigation.

In future as the coffee trees grow bigger he has a plan to carry out other forms of irrigation such as the use of a ‘rain gun’.
“This experiment aims at finding a solution to the issue of limited land that is available to the majority of our farmers that are eager to increase coffee production,” Nkandu says.

“They don’t have to be near a lake to carry out irrigation. A big percentage of the farmers live close to other natural sources of water such as swamps and rivers. There are community water dams in some areas too.”