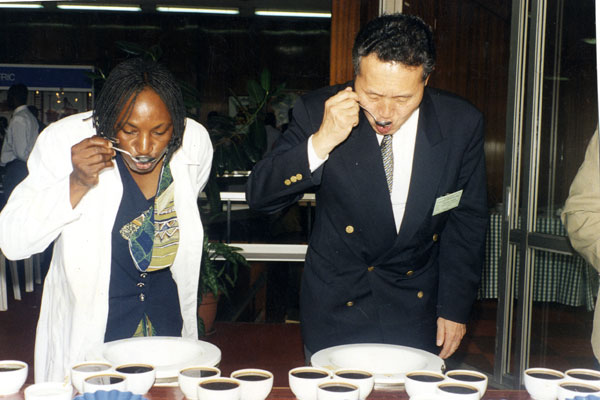 For a long time Ugandans have been steered to believe that the coffee they grow is simply a cash crop. And with 80 per cent of the population involved in agriculture, coffee growing has been a mainstay and cash crop for most households in the country.

As a result, coffee has remained the single leading export commodity which has earned the country second position as Africa’s leading exporter after Ethiopia.

Ethiopia, which is thought to be the birth place for coffee in Africa, is not only leading in production but also one of the largest consumers on the continent where coffee follows visitors at every mile of the trip.
Ideally, one would think the story is the same for Uganda which is ranked as the second largest coffee producer in Africa and tenth globally.

Surprisingly, many of those who grow coffee don’t even know how it tastes. Those who have tempted to devour the product, only eat the roasted cherries for special events as a symbol of covenant between families and individuals.
As a result the country’s coffee consumption has stagnated at less than 3 per cent compared to other big producers such as Ethiopia that consume more than 50 per cent of what they produce.

This is just 1.8 per cent contribution to the Gross Domestic Product (GDP). Three per cent of domestic coffee consumption contributes 1.35 per cent to the GDP, and earn the country about $340 million (Shs1.1 trillion) annually; if a cup of coffee goes for half a dollar. However, market experts say the country can earn much more from coffee and also improve on the country’s GDP.

Mr Nelson Tugume, the chief executive officer Inspire Africa, a company that promotes local coffee consumption in Uganda, says “…a 10 per cent increase in domestic consumption will earn the country $2.3 billion (Shs7.7 trillion) and this will translate into about 11.4 per cent to our GDP.”

Coffee being the second most traded commodity in the world market after oil, an increase in local consumption to only 10 per cent will drastically bump up the economy through the multiplier benefits that can accrue from quantity production such as job creation. Also, with continued value addition, coffee can fetch higher prices and increase incomes for the farming population.

Why low consumption
Experts explain that one of the major reasons for the low consumption locally is Ugandans for a long time have been led to believe that coffee is simply a cash crop.
“We need to wake up and know what makes business sense as ordinary people and as a country. We have always known that we only grow coffee for export,” Mr Tugume noted.

In 1991, Uganda government instituted UCDA and tasked it with the mandate to improve coffee marketing, to ensure the quality of exported coffee and to increase domestic consumption. Many strategies and ideas have been developed so far, but few results have been yielded, especially in increasing consumption by Ugandans.
According to the 2016 Uganda Annual Coffee Report released in May by Global Agricultural Information Network, low domestic coffee consumption in Uganda is primarily due to low purchasing power and an entrenched tea drinking culture.
The findings in the report, echoed by Mr Andrew Kilama Lajul, the director corporate services at UCDA, says: “…the low purchasing power of the people and an entrenched tea drinking culture inherited from the British.”
Players in the industry further say that the people don’t know why they should take coffee which calls for sensitisation. Indeed ignorance about the benefits of drinking coffee is attested to in a mini survey carried out by the writers in a few Kampala cafes and hotels.
Ms Alice Musoke, whom Prosper Magazine found at Bravo Café at Uganda House drinking tea, attributed her not taking coffee to health reasons.

“I don’t like coffee because I get heart palpitations,” she said.
However, Ms Betty Namwagala, the executive director Uganda Coffee Federation reacting to Musoke’s claims, said there is a lot of negative information about health concerns of taking coffee.

“A lot of research has been done on coffee. It is in a positive direction. This is where we need to promote coffee consumption because of its benefits,” Ms Namwagala shares.
Other thoughts attribute the low consumption to the high cost of processed coffee for the economically struggling Ugandans.

“An imported coffee brand is much cheaper than a local packaged coffee and we ask ourselves why,” Mr Edison Atuhairwe whom Prosper Magazine caught up with at Harryz Supermarket Kyaliwajala, ponders.

UCDA is implementing domestic consumption programmes in both the urban and rural areas. This is done with the guidance of a policy document, the National Coffee Policy, which was launched in 2013.
The key pillars of the policy are increased productivity, expansion of the coffee planting area, and the improvement of the coffee business environment.

However, in spite of having this policy document in place, the government is still struggling to drive up the coffee numbers and also increase on the domestic consumption of coffee by the local population.
Experts have suggested that the growth of domestic coffee consumption could be the key to reviving the local coffee sector to overcome its challenges.

Ms Doreen Rweihangwe, the quality assurance manager at UCDA, says the ineffective agricultural value chains, disease and the lack of a ready domestic market for coffee are some of the challenges coffee farmers are faced with.
These challenges prevent the farmers from benefiting from the crop and instead are forced to export raw coffee.
The chief executive officer of Star café, Ms Esther Kamiza, a coffee processing firm in Uganda involved in value addition, says lack of value addition to the coffee is one reason for the low domestic consumption.

“I think if we have value added to our coffee, we could improve on the uptake rather than export everything,” she said.
She also said we would have more employment of people in the coffee industry which would in turn boost local consumption.
“We export coffee beans to other countries which process the coffee and sell it back to Uganda expensively,” Ms Kamiza says.
Consumption campaign hatched
According to the architects of this move, Inspire Africa, UCDA and Usaid Feed the Future, local consumption will have augmented to 20 per cent up from 3 per cent, in the next five years.

Mr Gerald Katabazi, a coffee enthusiast and founder of Volcano Coffee and Academy for training baristas, shares that an aggressive attitude composed by the private sector could boost consumption.

“The private sector should be given chance on labour polices, commodity management using good packaging materials through marketing and promotions, be given incentives such as tax holidays, especially on equipment to process, brew and package,” he adds.

He added that formation of the Uganda Coffee Roasters Association is another step towards having a robust coffee market locally. Here, players will have room to dictate the challenges and find solutions themselves and UCDA, as a government agency, will give guidance and support.

Behavioural change
Inspire Africa is looking forward to creating a behavioural change in Ugandans by highlighting the various opportunities through the entire value chain, as well as offer training and mobilise logistical support to help interested youths start up business in the coffee sector.
During this campaign, a team of coffee consumption promoters has been serving 20,000 cups of coffee in and around Kampala for a week and the campaign will soon go to the rest of the country, meeting with farmers, and testing their coffee.

According to UCDA the country has more than 100 world class cafes up from only one in the mid-nineties.
Coffee has been the largest single foreign exchange earner for Uganda since the 1970s, and is based entirely on small scale production.
Uganda produces two types of coffee which constitutes 80 per cent Robusta grown in the areas around Lake Victoria basin, and 20 per cent Arabica produced on the highlands.
Coffee, as a commodity, has continued to play a leading role in the economy of Uganda, contributing between 20 and 30 per cent of the foreign exchange earnings.
Though large scale coffee producers are gradually emerging, the coffee sub-sector is almost entirely dependent on about 500,000 smallholder farmers, 90 per cent of whose average farm size ranges from less than 0.5 to 2.5 hectares.
The coffee industry employs over 3.5 million families through coffee related activities.

3.5 million
Number of 60kg bags of coffee the country produces per year.

7.7
Amount of money in trillion Shillings Uganda can get if only domestic consumption goes up by 10 per cent.