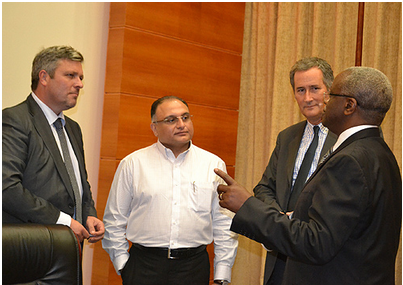 Prime Minister Amama Mbabazi has invited Louis Dreyfus Commodities, a leading global merchandizer of commodities and processor of agricultural goods to consolidate their position in Uganda and the entire East African region.

Mbabazi welcomed the investors to the country, describing Uganda as one of the best investment destinations in the world.
He said the Government was ready to offer them all the necessary support they require to establish themselves in the country.

The Premier made the remarks on Tuesday, while receiving Ciro Echesortu, the Chief Executive Officer, Louis Dreyfus commodities, the third largest global integrated commodities group in the world in revenue terms.

The investors from Louis Dreyfus who wish to establish a regional hub in Uganda were accompanied by Alykan Mukwano of the Mukwano Group.

Louis Dreyfus Commodities operates a network of assets around the world and their activities include merchandizing of agricultural products and metals in addition to production, sourcing, storage, transport and distribution.

In 2013, the Company transported and processed more than 77 million tons of commodities and posted about US$64 billion in net sales and US$640 in net income.

Louis Dreyfus commodities has presence in over 100 countries and deals in coffee, cotton, dairy products, rice, sugar, palm oil and metals among other products and employs 22,000 people globally.

“We are establishing ourselves in countries which offer significant growth opportunities for our group and we are also investing in diversified assets and building strategic partnerships,” Ciro said.

Mbabazi said Uganda is focused on value addition for all her products adding that most of the food produced is organic.
“60% of arable land is in Africa and Africa should be able to feed the whole world,” the Premier said.

In Uganda, the company is engaged in the coffee business and wants Government to offer them land in Namanve industrial park to construct a coffee processing plant.

Other members of the delegation were, James Wild, the CEO Middle East and Africa and Andrew Jones, CEO, East Africa.