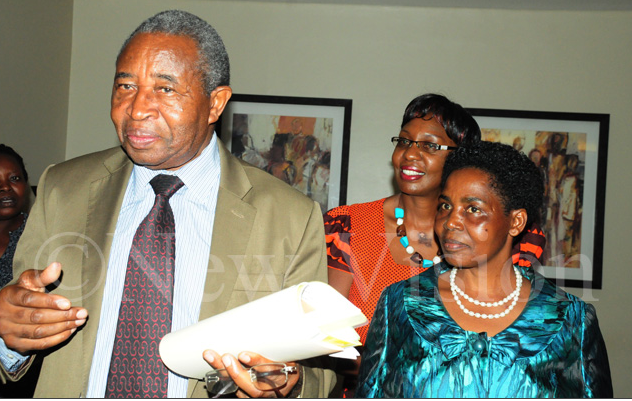 Agriculture Minister, Tress Bucyanayandi, has defended the proposed reforms in the national agricultural external service system, saying they are necessary for the sector transformation.

The minister was yesterday speaking at the 2nd roundtable discussion attended by ministry of agriculture officials and non-state actors working group on the proposed national agricultural extension service reforms at Sheraton Hotel in Kampala.

According to the proposed reforms, a specialised agency will be created to support the extension system by helping farmers to access potential market opportunities.

The reforms will also support the development of an efficient private sector input distribution system and separate promotion of inputs from the extension service delivery system.

The National Coordinator of Food Rights Alliance, Agnes Kirabo (R) welcoming the Minister of Agriculture, Tress Buchanayandi (L) accompanied by Commissioner of Agriculture, Beatrice Byarugaba (C) during the opening of the 2nd Colloquium on Agriculture Extension and Advisory Services Reform in Uganda on 3rd Apr,2014 at Sheraton Hotel. Photo by Peter Busomoke

“Some of these reforms seek to improve the quality of training offered in universities and agricultural colleges.
We are going to focus on practical agricultural training,” Bucyanayandi said.

The NAADs coordinators, according to the proposed reforms, will be phased out and given an option to join main stream production departments.

The district production coordinators will be strengthened to be technically and administratively responsible for agricultural programs in the districts.

If the reforms are approved, Local Governments will be empowered to plan for the agricultural sector, offer agricultural extension services, monitor and evaluate performance of the sector programs among other functions.

They will also be required to collaborate with the National Agricultural Research Organizations on matters pertaining to agricultural research and put in place and implement appropriate bye-laws.

Agnes Kirabo, the national coordinator of Food Rights Alliance, a coalition of Civil Society Organizations in the field of sustainable agriculture and food security said that the reforms should address the declining trend in the performance of agricultural sector from 7.9% in 2000 to 0.9 % in 2010/11.

“This decline is manifested in all the three sub-sectors of agriculture: crops, livestock and fisheries,” she added.

The number of farmers accessing extension services and national budgetary allocations to agriculture, Kirabo said, was declining. “There in funding from 4.6% in 2001 to 3.2% in 2013 which is way below the 10% share Uganda pledged,” Kirabo added.

But the minister said the performance of the agricultural sector was improving saying, “If it was not improving we would not be exporting food. We are producing 5m tonnes of coffee, 250,000 tons of rice and we are also seeing an improvement in tea and cotton,” Bucyanayandi explained.