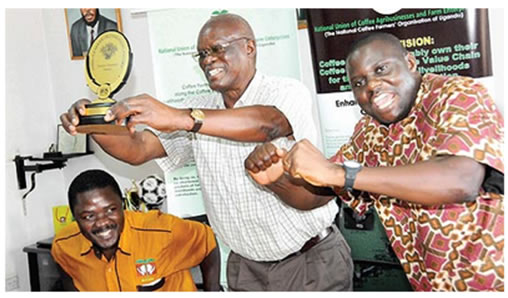 The local body beat three other organisations because of the benefits of bringing smallholder farmers together, nurturing them into practicing farming as enterprises and helping them to leverage on the Farmer Ownership Model (FOM).

During a press briefing in Kampala last week, NUCAFE chairman Gerald Ssendawula said FOM is based on the farmer group-association framework with the objective of supporting coffee farmers to organise themselves to assume as many roles as possible and be masters of their own destiny along the coffee value chain.

“We scooped the award because we have been instrumental in helping coffee farmers realise more financial benefits from farming. Our member’s predominantly sell graded coffee and the produce is pooled to enable them enjoy the benefits of large economies of scale,” he said.

NUCAFE executive director Joseph Nkandu said the body has over 160 coffee farmer associations across all the coffee producing regions. It comprises over 150,000 farming families with over 600,000 individual coffee farmers.

The main objective of the awards is to showcase and support the roles that farmer organisations play in promoting sustainable agriculture and ensuring food security in Africa.
From New Vision