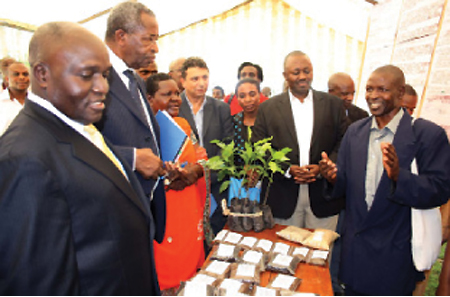 COFFEE farmers in the Rwenzori mountainous sub-region have a reason to smile after the recent introduction of a new Arabica coffee variety. Each coffee tree of the new variety yields 4kg compared to the old variety that produces 2kg.

“This new coffee variety (SL14) is also resistant to various diseases, has a good aroma and is drought-resistant. Unlike the old varieties that take three to five years to mature, this one takes two years,” said Tress Bucyanayandi, the agriculture minister.

The minister said every village in the benefiting districts will have a nursery operator of the new variety. He was speaking to Kasese and Kamwenge farmers and district officials recently during the launch of a sh2b coffee development project.

The minister noted that the project will get additional support from Uganda Coffee Development Authority on technical issues including the coffee value chain, increased production and strengthening the management of farming cooperatives.

Bucyanayandi noted that coffee research sites in the country have also been given special status and have been beefed up with more research scientists.

He urged farmers to add value to their coffee, saying a kilogram of processed coffee would fetch sh30,000 compared to sh4,500 for unprocessed coffee.

Dr. Crispus Kiyonga, the defense minister and Bukonzo West MP, decried the poverty levels in Kasese and urged the people to work hard to break the cycle.

“Land is getting scarce and yet people are having more children. This has resulted into land fragmentation. And instead of the stipulated five years, our target is to have this coffee planted within two years,” he said.

Kiyonga noted that the project is expected to fetch about sh60b per annum, compared to cotton, which brings only sh10b to their coffers.

The new seedlings will replace 60% of the old coffee trees in Kasese district, which have been devastated by the coffee wilt disease and leaf rust. Most of these trees were planted during the colonial times.

“Over 14,200,000 coffee seedlings will be distributed to coffee farmers through their farmer groups,” he said.

Mansi added that Hima Cement, who are behind the project, would also benefit from the increased coffee production by accessing coffee husks more easily. Husks are used as an alternative source of energy in the factory.