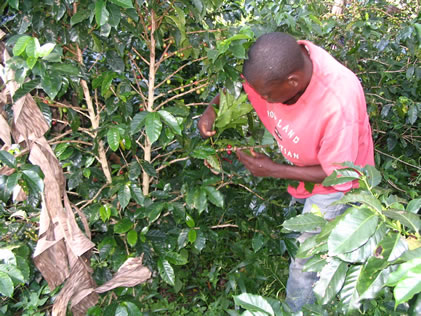 Ronald Ssenyondo has grown has grown coffee as his sole source of income for most of his adult life. But in 2000, Ssenyondo’s coffee returns began to go on a downward spiral that continued for the following two years. When he eventually decided that a reversal of his coffee farm’s fortunes had begun to look unachievable due to six started to contemplate a move from coffee farming. “I was planning to give up coffee farming and look at other alternatives such as poultry keeping,” explained Ssenyondo, a resident of Kalungu District.

New coffee campaign starts to pay off
However, in 005 when Ssenyondo wanted to start poultry keeping, the Uganda Coffee Development Authority(UCDA) was finalizing plans of launching a new initiative to rehabilitate old coffee trees that had been affected by the wilt disease .UCDA later partnered with other players to export about four million (60kg bags) of coffee by 2015. To achieve the target, stakeholders agreed to urgently develop and multiply coffee wilt disease resistant variety, streamline agro-input supply and improve extension services. “Annually, we procure and distribute about 15 million coffee seedlings to farmers in the countryside,” says Norman Basobokwe, the UCDA manager in charge of strategy and business development.

Uganda’s coffee farmer back on top
Robusta coffee (kiboko) is selling at sh2, 100 up from sh 1,900 per kilo.FAQ Parchment (Kasse) is selling at sh 4,200 up from sh 3,000 per kilo. Changes in international demand have seen prices for Arabic slump to sh5, 000 per kilo down from highs of up to sh10,000 per kilo in previous years. Uganda’s coffee exports jumped 66% in March yea-on-year as farmers released stockpiles before the next harvest. Uganda shipped 311,290 (60kg bags) of coffee compared to 187,595 bags in the same month last year. “The west and southwest regions are about to start their major harvest around this month. So, farmers sold big volumes of stocks in March because they needed space to accommodate the new crop,” said Basobokwe. “Our efforts have started to yield positive results. Farmers have started to harvest coffee that was planted five years ago when we launched a replanting campaign.”. He also noted that UCDA has partnered with the police to enforce the 1994 coffee regulations. The Police have been empowered to arrest and prosecute errant coffee farmers and traders spoiling the quality of coffee,” he said.

Introduction of coffee in Northern Uganda
In 2010, UCDA launched a project titled ‘Northern Uganda Coffee Project special interest in Gulu, Nwoya, Amuru, Lamwo, Lira, Kole, Oyam and Dokolo districts. “Introduction of coffee in the north has been as a vehicle for poverty reduction. It was envisaged that such an approach would provide a fall- back position for coffee amidst the wilt disease which attacked the traditional areas,” says Ngabirano. To date, UCDA has distributed 250,000 coffee seedlings, 4,000 banana suckers and 371,000 shade tree seedlings. A total of 115.5 metric tones of Kiboko coffee were marketed by farmers during the coffee year ending September 2012. In Lango, they marketed 83.5 metric tones and 32 metric tones in Acholi. In West Nile, Arabic continues to be the predominant coffee grown in the area and this covers Zombo, Nebbi and Arua, with 8,706 hectares being grown by 72,345 households. A total of 10, 934 farmers are engaged in Robusta coffee cultivation with 163 hectares of land being opened up for the crop. Betty Namwangala, the executive director of the Uganda Coffee Trade Federation, attributes the sharp export increase to the price fluctuations which hit the coffee sector last year. “I think the majority of the majority of the farmers never sold off their coffee because of the price fluctuations. “When they realized that better prices were being offered, may be it’s the reason they decided to sell off the coffee they had in stores,” she says.

Kennedy Senoga, the chief field manager of Hanns Neumann Stiftung, working with the Uganda Coffee Alliance in Mityana and Mubende, says in 2009, drought caused a loss of 44% in production. The executive director of National Union OF Coffee Agribusinesses and Farm Enterprises, Joseph Nkandu, attributes the sharp increase in coffee exports to their mobilizing skills which has attracted 600,000 farmers to their organization. Working under 155 cooperatives, these farmers advocate for better prices, facilitate production of good quality coffee and marketing.