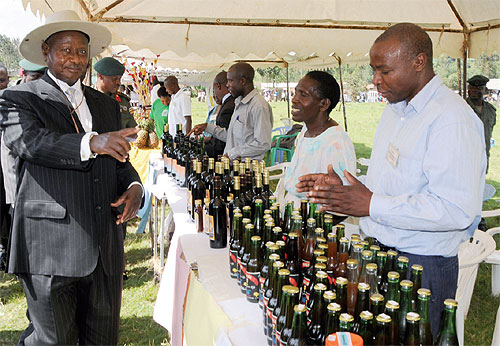 President Museveni has directed district officials to arrest traders who buy wet coffee beans from farmers in rural areas. Mr Museveni, who blamed the coffee dealers for a reduction in the quality of coffee exported from Uganda, gave the directive on Thursday during the 90th International Cooperative anniversary celebrations at Kabwohe playground in Sheema District.

“I don’t want to hear that people are buying fresh coffee from farmers any more. The minister of trade and industry should get closer to Uganda Coffee Development Authority and the Bureau of Standards to make sure that no businessman gets involved in this,” Mr Museveni said.

In what has now become a familiar song, the President blamed past leaders for failing to put in place and check the control chain of coffee trade from the farm to the market.

“We are going to make this a strong case such that when you are caught, you become an example to others. The minister should check and see if the legislation on this is strong enough, if not we shall make a new law such that we send (to the world market) good quality coffee that can favourably compete with that from other countries,” Mr Museveni said.

Earlier the area MP, Dr Elioda Tumwesigye, had told the President that taxing people’s savings by Uganda Revenue Authority is one of the setbacks that are crippling village banks.

“I was not aware that you (Saccos) pay withholding tax. This is very strange. People don’t have money and you remove the little they are trying to save? This is wrong and should stop. We should first encourage people to save,” he said.

Sheema District Woman MP Rosemary Nyakikongoro had earlier said the region had got stunted children due to poor feeding. The President cautioned district leaders to educate people about feeding their children.

“It is surprising to find stunted children in this region. There are many radio stations in this region but they focus on abusing Museveni. Why can’t district leaders use that part of this air time to sensitise people about feeding and diet? The reason you asked for districts and I gave them to you was to get your people out of such problems,” Mr Museveni said.