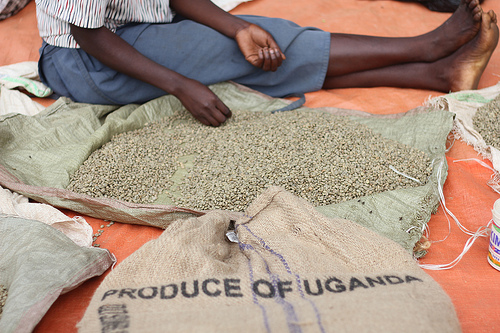 This Christmas season, coffee farmers are smiling all the way to the bank, following a sharp increase in the price of coffee on the local market. According to a New Vision survey, the prices of coffee beans have increased by about sh500 per kg in the last one month.

Coffee dealers across the country say raw and dry coffee beans still in husks, locally known as Kiboko, fetch an average of sh1,000 and sh2,500, respectively. In October, the prices of the same type of coffee went for sh700 and sh1,800, respectively. The dry coffee beans locally known as Kase go for sh4,300 per kg. An official at Uganda Coffee Development Authority (UCDA), said the coffee prices on the global market had also slightly gone up because of the reduction in exportation by the lead producer, Vietnam.

The official noted that the increase in prices was good news for farmers who were contemplating abandoning coffee growing.

Evaristo Kamar, a coffee buyer with Kasubi Coffee Factory in Buikwe District, said the prices of coffee increased because of high demand and good quality of the beans. He said in the previous months, coffee farmers were picking immature coffee beans, which gave bad yields on drying, hence negatively affecting the local market.

He made comparisons, saying 100kgs of ripe coffee beans is equivalent to between 60 and 70kgs of dry coffee beans, while the same quantity of immature coffee beans gives between 40kg and 45kgs.

In Bugisu, however, farmers are not happy despite the increase. “In 2008, when the union was still active, farmers were selling a kilogram of dry coffee beans at sh12,000, but today, it goes for sh3,000,” John Musira, former vice-chairman of Bugisu Cooperative Union (BCU) said.

Musira said the leaders of the union looked for market everywhere in the world and that it was the reason the union would buy coffee expensively.

“But the union has collapsed. The sh2.5b we left on the account was used up, so it can no longer buy coffee. The private businessmen are now cheating the farmers,” he said.

In 2011, Uganda exported over 3.14 million bags of coffee, ranking the country as the world’s ninth biggest shipper of the beans. The beans earned Uganda $466 million according to UCDA.

Coffee was formerly the chief cash crop for Ugandan farmers before and after independence. The crop was also the main foreign exchange earner for the country. But the last few decades have seen a sharp decline in coffee production due to pests and diseases which attacked and depleted coffee plantations.
From: New Vision