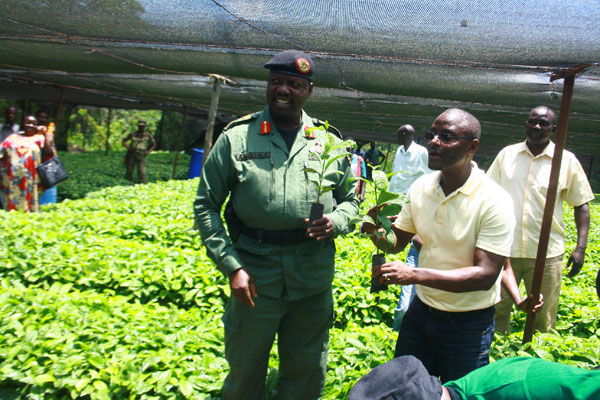 Government has started an initiative to woo farmers who have unutilised land to allocate it to coffee growing in a move meant to achieve social economic transformation.

Under the arrangement, the deputy chief coordinator of Operation Wealth Creation (OWC), Lt Gen Charles Angina, said the farmers will be required to form groups and register their land allocated for coffee growing.

He added that the arrangement is in fulfillment of government target to help households earn Shs1.6 million per month as the country strives to achieve middle income status.

“There is a lot of idle land because they are utilising part of it for subsistence. We want people to form groups under management and to make land productive to enable our people earn from profits,” he added.

Speaking at the start of the distribution of 2.5 million coffee seedlings to farmers at Kabango Coffee Nursery in Byabasiita, Kahungye Sub County, Kamwenge District over the weekend, Lt Gen Angina said the move is for the country to increase from four million to 20 million bags of coffee annually by 2020.
Kabango Coffee Nursery, one of the 66 nurseries was certified and contracted by the Uganda Coffee Development Authority to breed and distribute coffee seedlings in the district for the March to May season.

He added that in order to achieve the target, government through OWC will distribute 300 million coffee seedlings per year as well as promote modern farming methods such as irrigation.
The proprietor of Kabango Coffee Uganda Limited, Mr Ambrose Byona, asked government to consider increasing the current price of Shs300 provided per seedling saying it is little compared to the cost incurred in the process.

“The current price of Shs300 per seedling that was set 12 years ago is too low compared to the cost of inputs and labour as well as the dollar rate. And, this is worsened by the 6 per cent withholding tax which is very high,” said Mr Byona, suggesting a review of the prices to allow an increase to at least Shs600 per seedling.

He added: “If government is to realise its target of 20 million bags of coffee per year, there is need to review the payments to expedite the process.”