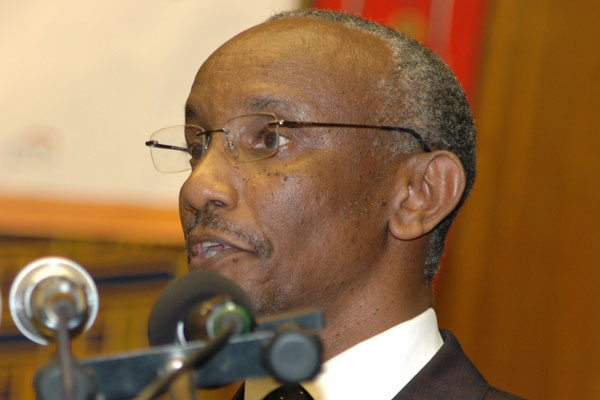 I am not retiring from the coffee industry – Henry Ngabirano

October will, for now, fold Mr Henry Ngabirano’s long term in public service spanning more than 25 years.
Before joining Uganda Coffee Development Authority (UCDA), he worked as a quality manager for 10 years at the defunct Coffee Marketing Board. For years, Mr Ngabirano has been Uganda’s main stay in the coffee industry and could be one of the country’s best coffee experts.

He oversaw the coffee policy reforms that liberalised the industry before superintending over the full privatisation and centralisation of the coffee industry in the early 90s.
But beyond Uganda, he has travelled across the globe and served as a delegate on most inter-governmental coffee organisations in Africa, US, Europe and Asia.

Memories
Mr Ngabirano says his profound memories will, for a long time, mainly hold onto the resilience that farmers have shown during “hard times when coffee prices were quite low and the devastation of the coffee by wilt disease was high”.

For years, Uganda has been Africa’s largest exporter of the crop and is only challenged by Ethiopia, which produces more in terms of quantity but exports less.
Unlike Uganda, much of Ethiopia’s coffee is consumed within the country, which could explain the production verses export situation.

Uganda’s coffee industry, according to Mr Ngabirano, has remained on the top even amid devastating diseases such as wilt, which has had a negative impact on production trends.
Production has increased from two million bags in 2005 to 4.1 million bags in 2015. Price instability has also had a knock effect on the industry with the worst being between 2002 and 2004. During the period, prices fell to $500 (Shs1.6m) per tonne.

The industry has adopted the use of modern technology such as tissue culture in the generation of coffee planting material. This has been implemented through encouraging the private sector that now have three fully established laboratories.
“We now have a fully-fledged coffee research institute unlike several years ago when coffee research was amalgamated with other crops,” Mr Ngabirano says, highlighting that the tissue culture lab at the research institute in Kituuza is being upgraded to the highest international standard.

This, he says, has allowed commercialisation of coffee to deepen as well as attract the elite into coffee farming.
Because of this, now Ugandan coffee is occupying shelf space in the US, Europe and Far East as a single origin. Mr Ngabirano is happy to note that Uganda was selected as a global Centre of Robusta Excellence for quality and processing systems and standards.

“I should also include development of a coffee drinking culture, by promoting micro roasting, café lifestyle and espresso based beverages like cappuccinos, latte and many others we see being crafted by young and highly professional baristas,” he says.

According to Mr Ngabirano, the potential for coffee to transform the rural incomes is appreciated by government and it is not surprising to see coffee being a major player in the Operation Wealth Creation programme for lifting Uganda into a middle income country by 2020. Because of this, government has increased funding for coffee.

Challenges
According to him, the biggest challenge at production level has been diseases and pests that come as outbreaks emanating from unfavourable and unpredictable weather systems.

“Low productivity, price volatility and unequal distribution of revenue generated from coffee are huge issues for us as well as other coffee producing countries,” he shared.

The other challenge has been the sustainability of a coffee grower who continues to be uncertain in view of the emerging issues in market demands which seem to always add costs for the farmer. In case of Uganda, also inadequate extension services and absence of favourable financing continue to limit growth of the coffee industry.

UCDA status
Mr Ngabirano is contented that as he retires he leaves UCDA in a position he wanted it to be – a great company to be associated with.
“UCDA provides an opportunity to meet amazing people both in the country and abroad. It is a place I will always cherish. I gained considerable knowledge about coffee and many other cultures,” he remembers.
He is happy to have made incredible contacts and friends that will forever impact his life as he describes his teammates incredibly supportive; and the coffee drink affectionately addictive.

Lessons
He shares that the lesson he is going away with is that authority and power are meaningless without respect for people.
“One big lesson for me was if you humble yourself you will be appreciated and get things done. In institutions like UCDA, you come across all elements of behaviour in society including those that don’t do the right things unknowingly or deliberately,” he notes.

He says his lesson has been that in whatever case, you have to stand up for the truth even if it is hurting. That way one should be able to stay upright. Being humble and having respect for everyone including those he even didn’t agree with seemed to work for him. This, he says, is another great lesson he will live to cherish.

Mr Gideon Badagawa, the executive director Private Sector Foundation Uganda, says: “I have known Henry Ngabirano for the last 15 years. I was privileged to work with him on different projects with the World Bank. He has been instrumental in developing coffee strategies and regulation of standards. He has played his part and he is a highly technical person which gives a challenge to whoever is stepping in his shoes to learn lessons from him.”

Branding Uganda
Mr Ngabirano says, the country exports negligible figures, if at all.
“This happens to be a challenge for all coffee exporting countries in the world. Brazil, the biggest exporter in the world, still exports about only 10 per cent of their production,” he notes.

The bigger challenge in his view is attitude and biases about food related products produced in least developed countries, the majority of the coffee producing nations.

He says companies that seem interested in investing in value addition of coffee in Uganda indicate limited domestic consumption as a deterrent issue for them.

Appeal
Mr Ngabirano says he is not retiring from coffee. “I am only changing from public to private service and I am sure it will be quite enjoyable.”

He appeals to the media in all forms to popularise coffee growing and drinking. And asks Ugandans to drink more coffee because there are great health benefits in one drinking three to five cups every day.