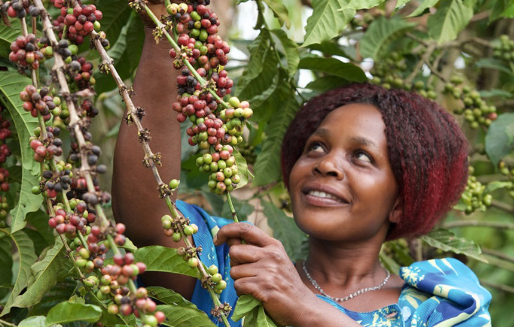 TMEA partnered with Uganda’s NUCAFE to invest in a coffee roasting machine. This enabled farmers to process coffee beans, ultimately increasing the value of their produce by 30% as compared to selling raw unprocessed beans.

NUCAFE seeks to improve the lives of coffee farmers by promoting a farmer ownership model. The model holds that farmers should own their product throughout the value chain, from the coffee beans to the final export product.

For a long time, farmers were only “custodians of coffee” says Joseph Nkandu the Executive Director of Nucafe,  one of TMEA’s partner in Uganda. They sold raw coffee to cooperatives, where it was de-husked, sorted and graded. At each stage of the value chain the price of coffee increased, but the growers only received payment for the minimum value at the first stage.

In the 1990s, the Ugandan government liberalised the coffee industry meaning private buyers could now compete with cooperatives to buy raw coffee from farmers. By 1993, unable to compete, cooperatives collapsed, leaving farmers in disarray.

To bridge the gap, NUCAFE undertook a research that revealed farmers were largely ignorant of coffee beyond the trees in their farms. With the survey results NUCAFE drew up a five-year strategic plan that centred on training and creating of awareness amongst farmers. Organising farmers into associations and cooperatives, followed, with the agreement that cooperatives would maximise income for members. And so, began the farmer owner business model which is changing the face of the Uganda coffee industry.

In the first step farmers contracted and paid machine owners to de-husk their coffee beans which increased their value by 10 percent.

Secondly, in 2009 the cooperatives with NUCAFE’s support  outsourced sorting and grading where graders took on farmers as customers. Graded coffee was worth another 30%. This step was also a breakthrough says Nkandu, because at that point beans could be exported; and this time it would be farmers who would do it.

To reach its next level, NUCAFE partnered with TMEA’s TRAC fund to purchase a roasting machine. For TRAC to disburse the money, Nucafe had to meet pre-set milestones which included: securing the commitment of 5,000 smallholder farmers to the project; the installation of a coffee roasting facility with a capacity of 100 kgs per hour; the creation of minimum 94 full time and 460-part time jobs in the coffee associations; a boost in coffee sales from 200 to 900 metric tonnes; and a 30 percent increase in coffee bean sales revenue for farmers.

NUCAFE not only set up a roasting facility that grinds and blends coffee, but also opened a Kampala coffee shop where it sells two of its brands.

Today, Nucafé has a membership of 188 farmers’ associations, impacting over 100,000 families.

Farmers who have been in Nucafé since inception, such as Muluya Philip Luyombo – chairman of the Kabonera Coffee Farmers Association – are reaping rewards. Following change of fortunes, Philip has bought additional 50 acres of land, purchased a car for the first time and built his family permanent stone house. But perhaps the biggest reward is that all his five children are well educated up to tertiary level. “My children are graduates”, he proclaims. “That’s from hard work using coffee. All their certificates are gifts from growing coffee.”

Nucafé, too, has received recognition, recently winning Investor of the Year MSE Category from the Private Sector Foundation Uganda.