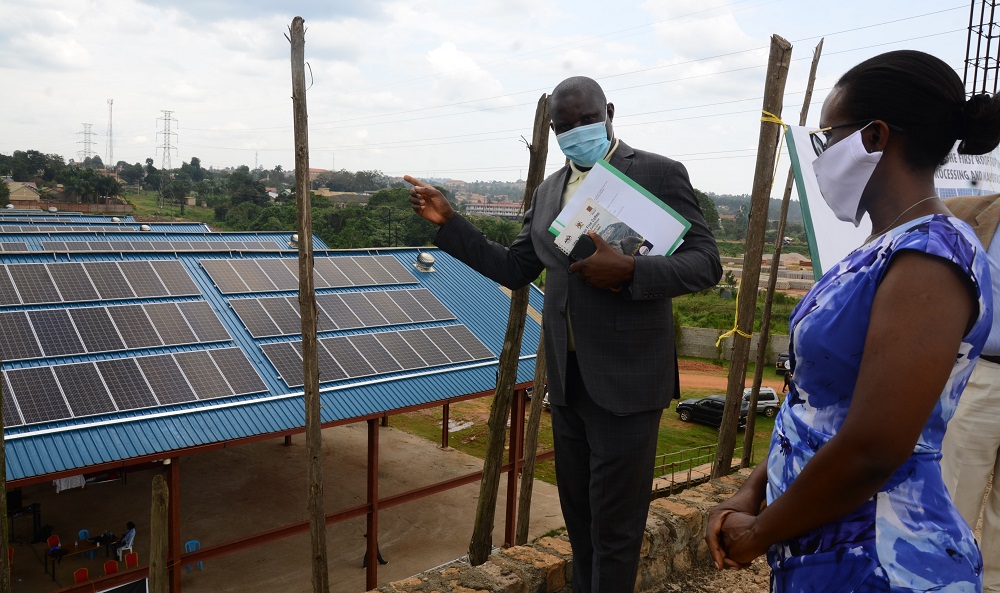 The National Union of Coffee Agribusinesses and Farm Enterprises (NUCAFE) makes commendable breakthrough to be first coffee organization in East and Central Africa to commission Industrial Solar Power Plant in Uganda at their coffee processing factory.

NUCAFE is currently implementing the project entitled:  Enhancing the Quality and Profitability of coffee by small holder farmers through improved storage, grading and marketing services funded by the Agribusiness Initiative Trust aBi, NCF/NDF and NIRAS among other partners.  This involves building farmers’ climate change resilience with design, supply, installation and maintenance of Solar (PV) system for NUCAFE factory in Namanve as one of the components.

The sizing of the rooftop industrial solar power plant in Uganda was done based on the power map developed by NIRAS. The contractor conducted a data logging exercise that was aimed at determining the specific load of the processing plant as well as future demand projections.

Technical layout Drawings of the intended solar power plant were developed by the contractor and reviewed for approval by a team  of consultants that were working with NUCAFE. A total of 442 panels each rated at 390Wp were mounted on a 1800m2 roof using trapeze bridges and clamps.

This will facilitate production and export of the first of the kind, Uganda Carbon Neutral Coffees. It will also save 241.3 tons of CO2 emissions per annum from the atmosphere and planet earth.

The Seven inverters deliver power to an Alternating Current Distribution Board from which an integration with the grid power happens through a connection to the bus bars that link to the grid. The grid provides the frequency on which the solar power operates. An energy management system tool is installed to monitor, control and synchronize power generation with the demand at the processing plant.

Protection of the generating was encompassed through installation of lightning arrestors and sufficient earthing of all necessary plant components.

Since commissioning of the project in August 2020, significant reductions of over 70% in power bills has been registered at the premises contributing to equivalent savings for the processing plant.

Production of eco friendly carbon neutral coffee has taken a big step. Reduction in processing charges incurred by farmers is set to be achieved progressively.