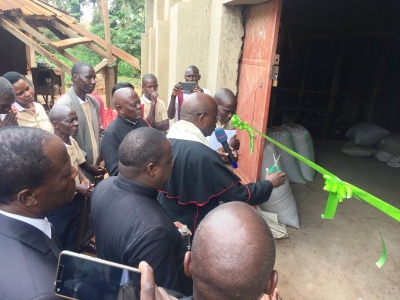 Coffee farmers of Bukakimu and Mitala Maria region have launched their Coffee hulling plant which they have been setting up over time with support from  Caritas Uganda – an International humanitarian and development organisation of the Catholic Church; and NUCAFE

The Vicar General Rev. Fr. Charles Kasibante of Kampala Archdiocese was the master of ceremony during the opening of the Bukakimu Coffee Hulling Plant. Through Vicar General, the Archbishop has argued the catholic community of Mitala Maria to grow coffee for a better livelihood.
Deputy Executive Director David Muwonge congratulated coffee farmers from Bukakimu for their collective success in setting up a Bukakimu coffee hulling plant in Mitala Maria.
Directors of NUCAFE went ahead to hand NUCAFE Coffee to the Vicar Gerenal Rev. Fr. Charles Kasibante and all the key players in setting up the Bukakimu Coffee hulling plant as a way of increasing and encouraging coffee consumption.